Dog What diseases are transmitted by ticks? 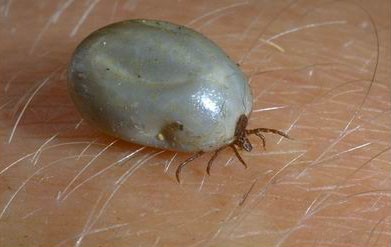 Two species of ticks frequently attack dogs in European countries. It is Dermacentor reticulatus found throughout France, mainly in spring and autumn, and Rhipicephalus sanguineus, especially active in spring in the south and the Mediterranean regions. These two ticks are never seen in humans. To this is added a third tick, Ixodes Ricinus, common to humans and dogs, found especially in woods and forests rich in deer.

Ticks attach themselves to the dog’s skin thanks to their rostrum which acts like a harpoon. Subsequently, they secrete saliva which will “digest” the cells and small blood capillaries to form a blood slurry that it sucks in to feed. The attachment sites are not chosen at random: ticks favor areas with thin skin such as the perineum, the periphery of the anus, the inside of the thighs, the base of the legs or the ears.

By attaching to the dog, ticks therefore cause a small wound on the skin. This small sore can become infected, or itch a little. Subsequently, if the tick is abruptly torn off part of the rostrum may remain in the skin, which sometimes gives rise to a small, firm, painless and benign nodule. In addition, some sensitive dogs may develop an allergic reaction to the saliva of the ticks.

Along with these minor annoyances, ticks can transmit more serious, potentially fatal diseases.

Babesiosis, also called piroplasmosis, is caused by the multiplication in the red blood cells of the parasites Babesia canis and in a lesser extent, Babesia vogeli. This parasite is inoculated by ticks R. sanguineus and D. reticulatus during their blood meal. Babesiosis is therefore not contagious from one dog to another. Young dogs are the most sensitive. 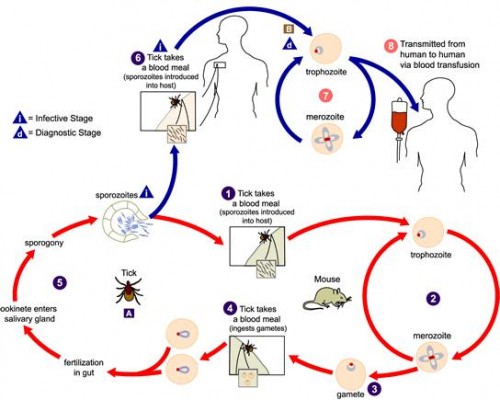 This disease is mainly found in the southwest, most often in spring and fall, which are the main periods of tick activity.

By multiplying inside red blood cells, babesias cause them to burst. In dogs, this manifests as anemia (pale mucous membranes) or jaundice (yellow mucous membranes). To this can be added liver and / or kidney failure. These symptoms appear after about a week of incubation and are of varying severity. During an acute episode of babesiosis dogs can be very downhearted with a high fever and dark, brownish urine. There are also chronic forms in which relapses and improvements follow one another.

While spontaneous cures are possible, the prognosis is much better with early treatment. This uses molecules that act specifically on babesias, as well as symptomatic treatment if the veterinarian considers it necessary (infusion, transfusion). The improvement must be substantial and rapid.

In prevention, there is a vaccine which confers partial protection. It helps reduce the severity of symptoms in case of infection. This vaccine is not carried out systematically. Its interest depends on your dog, his level of exposure to ticks, and should be discussed with your veterinarian.

Ehrlichiosis is another parasitic disease, transmitted by R.sanguineus. In France, it is mainly present in the Mediterranean rim. The culprit is a parasite called Ehrlichia canis, which develops in blood cells. Again, the disease can occur in an acute or chronic form. 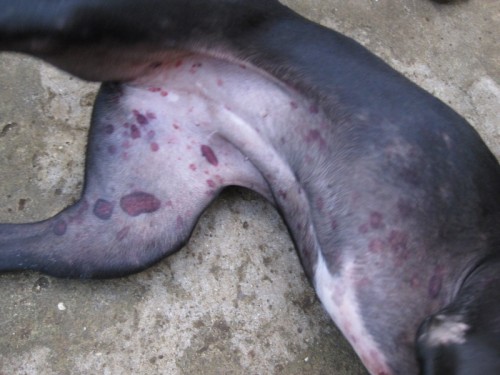 After ten days of incubation, the acute phase is manifested by very general signs such as fever and significant depression. When the disease is chronic, there are mostly signs related to blood changes such as anemia or nosebleeds. In the absence of treatment, the signs may disappear spontaneously, but the dog remains a carrier of the parasite and recurrences are frequent. This disease is fatal in one in three cases.

Borreliosis, better known as “Lyme disease”, affects both dogs and humans. It is due to Borrelia Burgdorferi, a bacteria transmitted by ticks Ixodes Ricinus. Most often the infected dog does not show any symptoms. When the disease is expressed, we observe arthritis as in humans: the dog limps intermittently. The incubation phase is long, the signs do not appear until 2 to 5 months after the tick bite. The pain can be severe, possibly accompanied by fever or severe heart or kidney complications, or even neurological disorders. Treatment is based on the administration of antibiotics. It is long and difficult, and it seems that complete eradication of the parasite is almost impossible. 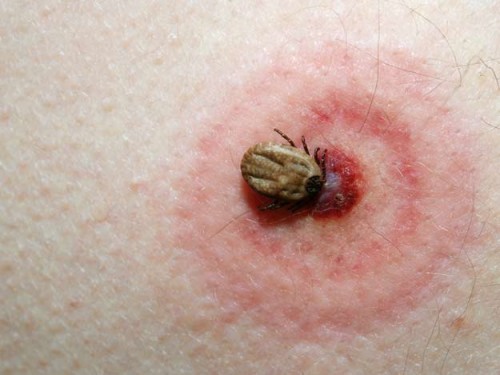 As with babesiosis, a vaccine is available. It mainly targets very exposed dogs like hunting dogs for example, from the age of 3 months. For others its interest is questionable, given that this disease remains quite rare. Protection is never total and the vaccine does not exempt the application of preventive measures against ticks.

Unlike the previous ones, this disease is transmitted by ingestion infected ticks, for example if the dog is bothered by the tick and the bite. The parasite, Hepatozoon canis thrives in white blood cells, mainly in summer, in dogs that spend a lot of time outdoors. The seriousness of hepatozoonosis lies in the fact that it induces immunosuppression, and therefore promotes the appearance of other diseases. In many cases no symptoms are observed. If the disease is expressed, the dog presents fever, depression as well as diffuse pain which results in difficulty in moving and lameness. 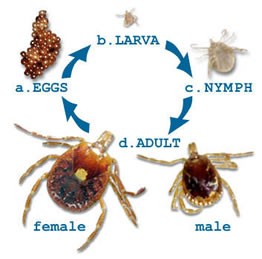 The prognosis is grim, because at present there is no really effective treatment.

The fight against ticks

Even if for certain diseases treatments or even vaccines are available, the fight against the ticks themselves must remain the first measure of protection of your dog.

Immediately after each walk, and especially during the most risky periods, carefully inspect your dog and paying particular attention to areas where the skin is thin (pavilions of the ears, inner thighs). If you see a tick, remove it quickly, before your dog has time to pull it out on his own. The use of tweezers should be avoided because the risk of leaving a piece of the rostrum in the dog’s skin is high. Formerly widely used to “put to sleep” ticks before removing them, ether is no longer available over the counter in French pharmacies because of its significant toxicity. It is best to get some tick hooks, which you can easily find in all pharmacies. Inexpensive and reusable, they are often sold in pairs, of different sizes depending on that of the tick to be removed. It is then enough to grasp the tick delicately with the hook, and to make a quarter turn to remove it without any difficulty. 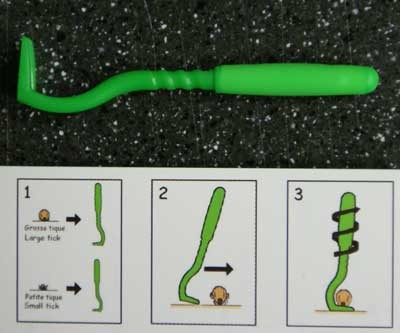 Because prevention is always better than cure, it is best to treat your dog preventively with the help of antiparasitics. Ask your veterinarian for advice. They exist in different forms (pipettes, spray, collars, etc.), which provide variable durations of protection. Be careful, we often forget that not all antiparasitic collars are water resistant …

Dog How does a caesarean go in a female dog?

Dog Otitis in dogs: how to treat it well?