Dog How is reproduction in the bitch?

Contents hide
1 When can my dog ​​be pregnant?
2 How does gestation take place in the bitch?
3 Pregnancy diagnosis at the veterinarian
4 How to take care of a pregnant bitch?
5 How does a normal birth go?

When can my dog ​​be pregnant? 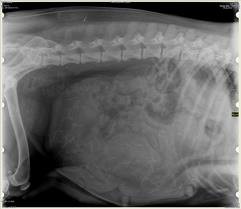 This question is often asked in two different situations: either your bitch has been covered by a male, and you are wondering if she can be pregnant, or you want to plan a mating for your bitch. In all cases, you must have some knowledge about the bitch’s sexual cycle.

The age of puberty is variable. Small breed bitches are pubescent earlier (generally between 4 and 10 months, against 1 year or even 1 and a half for large breeds). Bitches generally have 2 cycles per year, but some will have only one, while others will have 3. The duration of the cycle as well as the interval between two cycles is variable from one bitch to another. . There are four stages:

– During the next ten days (on average) the blood loss disappears. The bitch continues to attract males, but this time she accepts mating. Her behavior is often modified: she is more lively, runs away, and eats a little less than usual.

– There follows a fairly long phase (2-3 months) during which the bitch may or may not be pregnant. It is often during this period that she develops disorders such as metritis.

– Finally, a period of sexual rest sets in for one to several months.

If you want to breed your dog, it is best to consult your veterinarian beforehand for several reasons:

– Perform a clinical examination to ensure that your dog is in good health, define a deworming program, but also to check that her vaccines are up to date, which is important for her health and those of the little ones. Indeed, the bitch will transmit her antibodies to them at birth via colostrum. Vaccination of the bitch is therefore also important for the protection of the puppies.

– Carry out a follow-up of the cycle of your bitch to determine the ideal moment for the projection. This follow-up can be based on vaginal smears which the veterinarian then observes with a microscope, or on measurements of progesterone in the blood.

Two projections are sometimes necessary to be sure that the bitch is pregnant.

It is often advisable not to breed your bitch from her first heat, in order to be sure that she has finished growing and that the pregnancy is going well. In addition, the risk increases from a certain age, and it is not advisable to breed your dog beyond 7 or 8 years. Finally, it is better not to exceed a frequency of one litter per year and per bitch.

Important: be aware that beyond 2 litters sold per year, you will be considered a professional breeder and subject to administrative constraints.

How does gestation take place in the bitch?

In female dogs, gestation lasts an average of 63 days after ovulation, i.e. between 57 and 70 days after mating.

The externally visible signs are quite late. In general, the behavior can be changed a bit. Pregnant bitches are generally calmer, more fearful and more solitary. Some vulvar discharge can be observed.

The udders also change: around 35 days of gestation, the teats lengthen and swell slightly. Then, around 45 days, a few drops of milk may come out if you put pressure on it. At the end of gestation, the udders increase significantly. Visible distension of the abdomen is late.

From the 5th week of gestation, the bitch’s metabolism increases a lot. His appetite therefore also increases. You should adapt your diet to this period.

Be careful, however, these signs are late, unreliable, and above all they can be the witness of health problems unrelated to pregnancy. If you suspect that your dog is pregnant, it is best to have this confirmed by a veterinarian.

Pregnancy diagnosis at the veterinarian 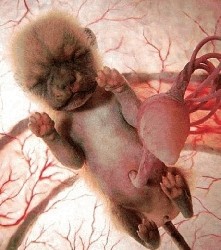 Finally from 47-50 days, the bones of the fetuses are sufficiently formed to be able to be distinguished on an x-ray. It may thus be possible to count them by counting the number of heads visible on the radio.

How to take care of a pregnant bitch?

For the first few weeks, you can continue to feed her the same diet as usual. However, from the 5th week of gestation, the bitch’s nutritional needs increase. However, she is not necessarily able to ingest a larger quantity of food, especially since the fetuses occupy an important place in the abdomen. Food must therefore be richer, more energetic. In this, puppy food can be interesting. In addition, it may be a good idea to split meals further. Ask your veterinarian for advice on feeding your dog. Consider making a gradual food transition for any new diet.

Your dog can continue to have moderate physical activity. She will surely tire more quickly. One solution may be to reduce the duration of walks, but to increase the frequency.

Warning: Never administer medication to your dog without first seeking the advice of your veterinarian. Many drugs are contraindicated during gestation due to toxicity to the fetus.

How does a normal birth go?

Selection by humans has resulted in the creation of certain breeds unable to give birth on their own, generally because the puppy’s head is too large at birth to pass the mother’s pelvis. These are the so-called brachycephalic breeds that have flattened muzzle like bulldogs and pugs, or dogs whose heads are large compared to the rest of the body like chihuahuas. For these bitches the caesarean section is compulsory. The date of the operation is planned in advance.

In other cases, the birth of the bitch can take place at your place. Make sure she has a quiet and comfortable place, which you will make available to her several days before the expected date of farrowing, so that she can get used to it. 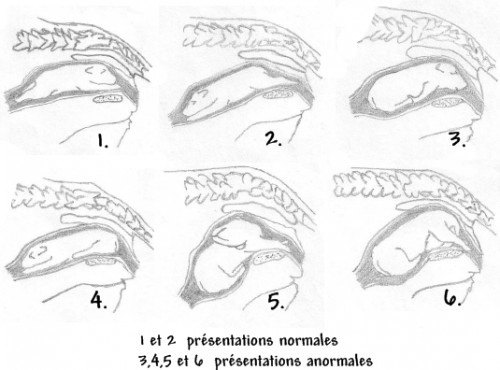 There are a few warning signs of childbirth. For example, in the 24 hours before birth, the rectal temperature usually drops below 37 ° C. At first, the bitch tries to isolate herself. Others, on the other hand, refuse to leave their owner. Contractions then occur, as well as vulvar discharge that is green in color. This phase can last from 1 to 4 hours. Then begins the phase of expelling the first puppy. This is most often done in anterior presentation, but posterior presentations are not uncommon.

An important rule is to intervene as little as possible without first taking advice from your veterinarian. Bitches are very sensitive to infections (metritis in particular) and any handling with insufficiently clean hands can have serious consequences. Monitor the birth from a distance. Generally speaking, the birth of a bitch can be quite long. You have to be calm and patient.

If you know that several puppies are due, know that it can take up to two hours between two puppies. Beyond that, notify your veterinarian. Likewise, if the bitch does not seem to be in good shape, or if she is losing a lot of blood, call the veterinary clinic. Even in an emergency it is always better to warn you of your arrival.

Each baby will be licked by its mother, who will eat the membrane around them before breaking the umbilical cord with the teeth. Make sure the puppies start suckling quickly.

In the vast majority of cases, farrowing takes place without complications.

Cat Where to throw biodegradable cat litter? 5 ways to recycle it