Dog How does a caesarean go in a female dog?

For information on the normal course of management and childbirth in the bitch, you can refer to the article already published on this subject: “How is reproduction in the bitch”. In most cases, parturition takes place naturally, without requiring human intervention. However, certain circumstances lead to the decision to intervene surgically, both in the interest of the mother and that of the offspring.

In some breeds, caesarean section is scheduled automatically. This is particularly the case of brachycephalic dog breeds, selected for their bulky head and small body (for example the English or French bulldog). The puppies then have a skull that is too large to pass their mother’s pelvis, which makes the cesarean essential. This is known as “fetal-maternal disproportion”. Other breeds are also predisposed to difficult births, such as the Chihuahua or the Yorkshire terrier.

But the small brachycephalic are not the only ones to be too big to be expelled naturally: it is also the case of the single fetuses. When the bitch is expecting only one cub, it tends to grow larger than if it were surrounded by siblings, and it is common for a caesarean to be necessary.

Too many litters can also be the subject of a scheduled cesarean section, as the birth can then last a very long time and exhaust the mother.

Finally, the individual conformation of some females predisposes them to have difficulty giving birth, for example because their pelvis is narrow. For bitches who have already given birth by cesarean section, (and sometimes several times as is the case with breeding bitches), the cesarean section can be scheduled in advance. 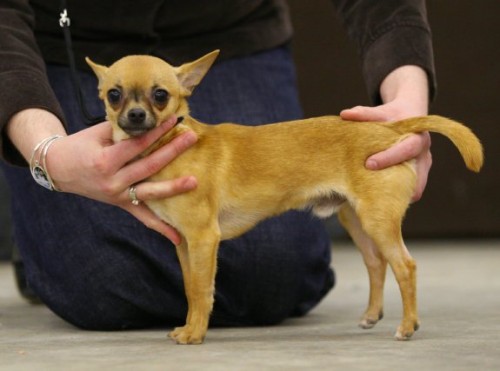 The optimal time for a cesarean section is determined from the day of ovulation and blood progesterone measurements. The operation takes place before the onset of contractions. The scheduled cesarean section would not affect subsequent fertility. *

In other cases, the vet decides to perform an emergency Caesarean section because the birth does not go as planned (this is called “obstructed labor”). Certain signs should prompt you to consult your veterinarian as soon as possible, such as the presence of purulent or hemorrhagic vulvar discharge, an abnormally long gestation (more than 72 days), unsuccessful expulsion efforts on the part of the bitch for more than 30 minutes, or when more than 4 hours elapse between the expulsion of two fetuses. The veterinarian may have recourse to additional examinations to try to find the cause of the obstructed labor (x-ray, ultrasound, etc.). The problems are either related to the mother or to the puppies. In some cases medical treatment is possible, in others it is necessary to intervene surgically.

1) Problems related to the mother

Maternal obstructed labor is often caused by the uterus not contracting (uterine inertia). Medical treatment may be attempted, but if it fails, a cesarean will be necessary. Trauma such as pelvic fractures or tears in the uterus are also indications for surgery. Sometimes the vet may find that the bitch is too tired or too sick to be able to withstand a parturition, which requires a lot of energy.

Unfortunately, it can also happen that one or more fetuses are not doing well (there is an increase in their heart rate). It must then be extracted very quickly. Finally, in some cases a dead fetus can decompose in the womb and endanger the health of the mother. In the event of a significant infection, it may be necessary to remove the uterus during the cesarean section.

The emergency cesarean section takes place during parturition, when labor has already started. It is easy to understand that the risks incurred are not the same as during a scheduled cesarean section, at the end of a normal gestation in a bitch and healthy fetuses (the survival rate is then similar to that of natural birth).

In any case, it is a surgical operation, which is never an act to be taken lightly. You have to think about it and be aware of the risks before deciding to put your bitch up for breeding, especially in brachycephalic breeds. In the best interests of the dog, it is important that breeders also select bitches that can give birth easily.

In the absence of complications, a cesarean is a fairly quick operation. The veterinarian sets up a suitable anesthesia protocol that both calms the bitch and manages the pain associated with the operation, all without compromising the health of the puppies. As in humans, it can go through epidural anesthesia.

This operation requires taking care of both the mother and a sometimes substantial litter of puppies. So you have to be very organized, everything is prepared in advance. 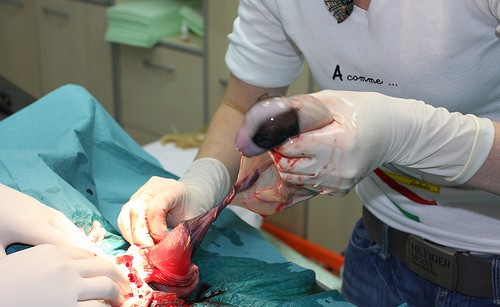 Very soon the little ones are out and, while the vet is stitching up the wounds and taking care of the mother, an assistant has to take care of the puppies. Depending on the staff available and the size of the veterinary clinic, the owner may be called upon for this task. Breeders in particular are often used to participating in puppy nursing. In general, the mother wakes up quickly, so she can breastfeed and take care of her young without delay.

After having freed the puppies from their fetal envelopes, you must first the help breathe, by clearing the secretions that block their nose and mouth. To do this, you can use a nasal aspirator or simply a small moistened compress.

Then the little ones are vigorously rubbed with a warm towel. The purpose of this operation is both to dry them so that they do not cool (thus replacing the mother’s tongue), and at the same time to stimulate them in order to accelerate the establishment of breathing. As in humans, the first cry is watched with attention, because it is the sign of the deployment of the lungs and attests that the newborn has taken its first breath. In case of difficulty, certain drugs, administered under the tongue, can help the puppy to start breathing. 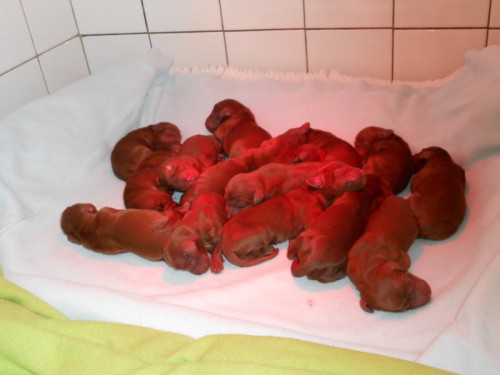 All of this must be done immediately, and on all puppies simultaneously. Several people are therefore often necessary in the event of a large litter.

The fetuses are carefully examined and any congenital anomaly is looked for (cleft palate, non-perforation of the anus).

Care is possibly carried out at the level of the umbilical cord, then the young are kept warm (for example in an incubator) while awaiting the complete awakening of their mother. As soon as she leaves the unit, the young are placed next to her and have access to the udder. Sometimes a cesarean can interfere with milk production, but this temporary problem does not last longer than 24 hours. Replacement milk can be used; Follow the advice of your veterinarian. In most cases the maternal instinct is preserved, and very quickly the mother spontaneously takes care of her litter.

Know how to take care of your pet’s oral health

Dog What diseases are transmitted by ticks?