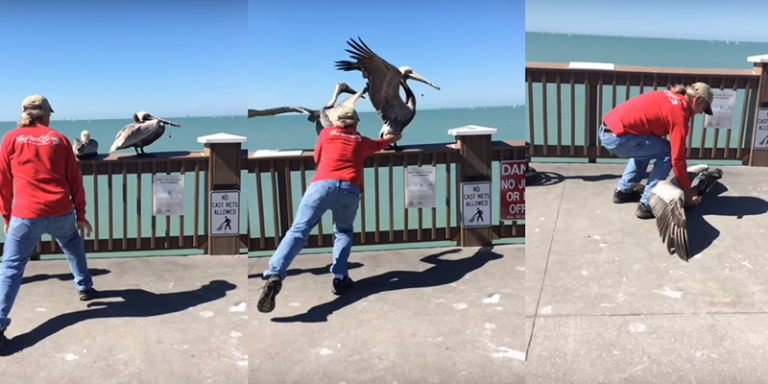 Contents hide
1 A woman filmed the moment when a man manages to hold the animal
2 Check out the video:

A group of people were watching some birds on the beach, when they realized that one of them was having a hard time. Its large beak was completely wrapped in a very strong fishing line, which prevented the animal from being able to feed and even communicate with the other birds.

If the pelican continued like that, it would probably starve to death in a few days. It was then that two men decided to help him.

Few people know, but pelicans can be quite aggressive animals when they feel threatened, and their giant beaks can do a lot of damage to their victims. Even though they knew of this risk, and of the attack that they could suffer from the other birds around them, these people did not manage to leave the animal like that.

It is very important that everyone is aware of the impact and suffering that some attitudes can cause in the lives of other living beings on the planet. This fishing line was probably discarded incorrectly, which meant that the poor guy got stuck.

This, unfortunately, happens daily with several marine animals that die in the traps caused by human pollution in the oceans.